New beginnings (such as the current pandemic) bring about opportunities for transformation if we suppress current realities and augment possibilities. This enables us to adopt agile strategies to create new systems which then become our new realities. Therefore, I have codified below the relation between Transformation, Vision, Team, Time, Resources and Resolve in a model which I call the Austin’s 5 Forces Model for Transformation.

Schematic below represents these forces and their interplay: 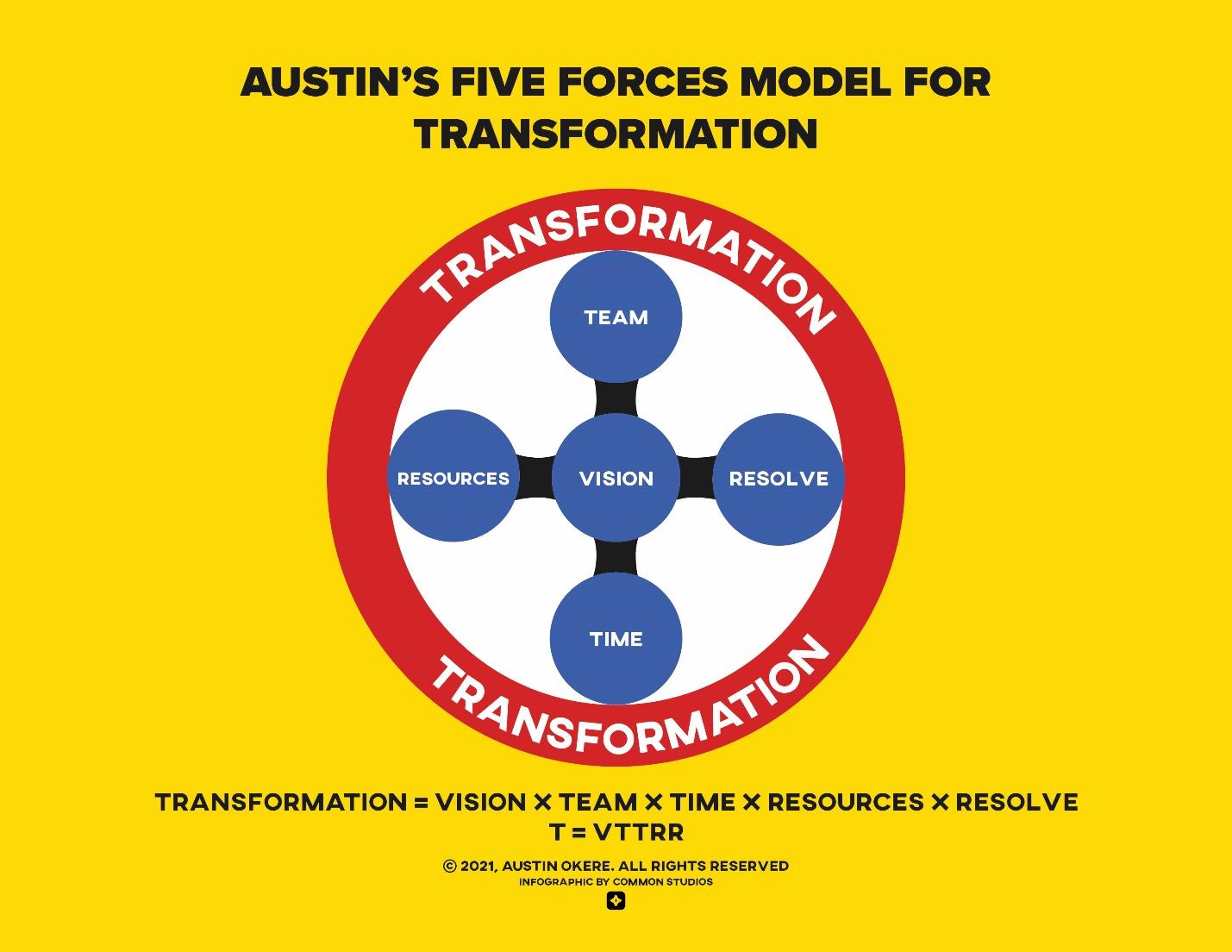 A great vision is the first force and the crux of any transformation journey. Singapore under the leadership of Lee Kwan Yew provides a perfect example. Lee Kuan Yew was the first and longest-serving Prime Minister of Singapore.

It was his leadership that transformed Singapore from a third world country into a thriving metropolitan city in just three decades. His famous saying “The Impossible Can Happen!” encapsulated the power of his vision. The clarity of the vision engenders team conviction.

The second force of the transformation journey is a high performing team or a winning team.

A winning team has both Aptitude and Attitude, and consistently demonstrates a keen sense of critical thinking, pace, and agility. They have a deep sense of alignment to the vision and autonomy to operate freely, while keeping an eye on the big picture. They understand the WHY of their roles and not just the WHAT and HOW. Such a team led by a visionary leader is a lethal force for transformation. At its height, NASA estimates that a total of 400,000 men and women across the United States were involved in the Apollo programme. Neil Armstrong and his right-hand man Buzz Aldrin on the lunar landing module are examples of a great team.

The third force in the transformation journey is time. This is the most significant limiting factor of all constraints. Thus the whole Apollo project would have been futile if their fiercest competitor, Soviet Union, had been able to achieve it first.

While resources are not unlimited, they must be provided in adequate measure to prosecute the vision. Reaching the moon was a giant leap for mankind. The Apollo program’s total cost was about $25.4 billion, about $152 billion in today’s dollars. Hundreds of companies helped construct the Apollo spacecraft, while Neil Armstrong, Buzz Aldrin and Michael Collins exhibited great resourcefulness complimentarily. The rapid prototyping and deployment would have been impossible without that kind of Resources that were made available, and the resourcefulness of the team.

Of all the forces for transformation, perhaps the most crucial is Resolve.Consequently, Will Power to succeed that determines the fortune of a venture. It is resolve that drove Thomas Edison in the discovery of the electric bulb. Edison and his lab associates, called “Muckers,” conducted thousands of experiments to develop the electric light bulb. Therefore, to make it functional, each step required the invention of a new component. From vacuumed and sealed glass bulbs to switches, special types of wire and meters. Thus like previous efforts, the greatest challenge was coming up with a material that could serve as a long-lasting filament. After testing thousands of materials, including over 6,000 types of plant growths, they found the best substance was carbonized cotton thread.

It is resolve that made an obscure team such as Leicester City win the English premiership league in 2016 against more formidable and established opponents such as Manchester United, Manchester City, Chelsea and Liverpool.  Resolve speaks to the tenacity of the team to achieve the vision.

Therefore, I will like to give credit to all transformational leaders. Whose works have provided valuable insights, and also to my dear Son, Omimi Okere, of Common Studios for correctly interpreting my model in an aesthetic schematic.

Austin Okere is the Founder of CWG Plc, the largest security in the technology sector of the Nigerian Stock Exchange, and Entrepreneur-in-Residence at CBS, New York. Austin also serves on the Advisory Board of the Global Business School Network, and on the World Economic Forum Global Agenda Council on Innovation and Intrapreneurship. He now runs the Ausso Leadership Academy focused on Business and Entrepreneurial Mentorship.

Towards a cashless future

IT Automation and Leadership

The emerging giant of the global financial industry

How is API driven innovation improving the banking experience?

The ordinance of a digital Africa

The need For a DeFi ecosystem in Africa